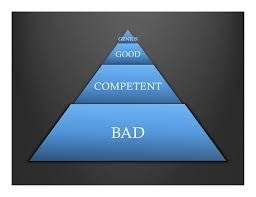 Compared to what you hear on average, how good of a singer am I? What a frequent question!

It’s a natural leap to want to know your “level” of talent with singing. If you make around the same sounds all day, sing with the same volumes, same pitch ranges, etc, your voice will feel like an instrument that only makes a “fixed” amount of sounds, so you may see your voice as a fixed thing, like bone structure, which is (for the most part) a fixed thing. So we hope that whatever we’re “stuck with” is nice. We hope it’s at least average or above average. This can give us a sense of reassurance and encouragement so that maybe, we dare to learn a song and sing it and even enjoy it! Much like deciding whether you could be a model or not.

When we talk about your “voice”, we aren’t talking about a noun. We are talking about a verb. Vocal folds do not make any sound without YOU moving them. So the problem with rating your voice is that the sounds you make are directly a result of what you DO and NOT who you ARE (or what your voice is made of). It’s like rating your legs based on how well you walk down the catwalk.

There is another, more important reason why rating your voice is useless though, and it’s that it doesn’t have a positive, reliable effect on how you use your voice, how well you know your song, or how clearly you present your message to your audience. THIS is what people ACTUALLY judge you on. Why people are concerned with judging singing more than enjoying and participating with singing is a topic for another day, but of what you can control, the previously mentioned things are what really matters. In many cases, rating yourself as a singer actually interferes with this process.

When you sing a song that is new to you, your focus will be best targeted towards the sounds you intend to make, and how to make those sounds. Does this verse come after the chorus or is it before the chorus? Are there any areas I need to spend more time with to have memorized? How does it feel to sing this long note, does it feel like I have some air leftover or do I feel that I can’t squeeze any more air out? Such questions take you new places, and directly affect how easy it will be to channel performance nerves into performance power…and/or how recklessly you can sing in the shower, wherever it is that you want to sing! If you’re concerned as to whether you will “be a good singer” then your focus is both on how to make sounds and making accusations at yourself at every turn, and each new sound you learn is rife with internal reactions and judgments against yourself. That’s a waste of energy, less effective, and less fun.

Just like with any skill, no matter how well we know the music, know the message of the song, we still have the risk that we’ll forget everything, because, well, we’re human. If our focus is not on our rating but instead on our message, we have the opportunity for still sharing the music, and having an Ella Fitzgerald moment.

Now what if you have this perspective that you are at a certain “level” compared to everyone else? Then a bad day = a bad singer.

A lot of people fear singing because there is a level of cruelty that has been openly displayed to singers when they have bad days, and the more fame, the higher the volume of comments. My ears always seem to catch every comment about singing I hear around me. Apparently, Alicia Keys completely lost her ability to sing and is a terrible singer! Really? I don’t think so. I think that because she is human, she will inevitably have a below-average performance on some song at some point, just like Pavarotti’s cracked notes, just like Ella’s forgotten lyrics. Just as I have, and probably will. And that’s okay. I like being human, because I get to feel and share those feelings with you. At the end of the day, isn’t that why we’re singing to begin with?

My Story with Piano…

My Story with Piano…