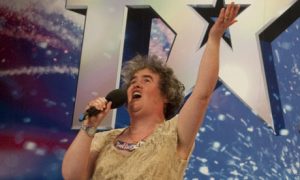 Some people unconsciously use their voice in a healthy way, we call these people “talented”. Great as short hand, but remember, talent as people typically understand it does not really exist in singing.

Because singing is a physical activity in which every joint and muscle we are moving to sing is on the inside, many people don’t think of singing as a physical activity. On the outside, it really doesn’t look like much is happening when someone is singing, they just inhale, move their mouth around on an exhale, and then inhale again. So the natural assumption one would make when someone sounds good is that they have a really nice voice-box that makes great sounds. Then some people have some weaker “set of pipes” that can only make mostly ugly sounds. So someone who in reality is using their voice very well sounds good, we think it has something to do with the quality of their vocal folds. We say things like:
“Wow, what a set of pipes!”
“Great voice!”
“She has powerful vocal chords!”
Notice we use nouns, not verbs. So that person isn’t doing anything wonderful, they have something wonderful that makes sounds for them. So we think someone “has” a “great” voice, and they just breathe and start singing and everything just sounds good. So if that same thing doesn’t happen to you, then you must have a “crap” voice. BUT! we all have the same vocal structure, so it’s really about we how intentionally or unintentionally move the structure, or how we don’t allow it to move.
So actually…
If you take any singer no matter how talented, and tell them to move certain muscles in certain directions, they will sound terrible, and feel physically uncomfortable while singing, and strain their voice.
I can tell you how to do that right now.
Vocal-Talent-Vanishing-Exercise- (do not repeat or vocal strain is guaranteed!)
Tighten and lock every muscle in your body, be as stiff as possible, now protrude your chin and tighten it as much possible, then, while stiff, blow out as much air as possible and try to also sing very loud at the same time.
Ta-Dah! Talent vanished. Feels terrible, probably doesn’t sound particularly pleasant either. There are many things that work in singing, this combo does not and never will.
Pavarotti was seen as someone with tremendous talent in singing, with “a great voice” but few people know that he actually got vocal nodules when he was younger from poor technique.  Even fewer people know that many “talented” singers have become “untalented” and lost their singing careers because of losing their healthy singing habits. Pavarotti physically discovered how to sing, and as everyone knows, it worked in his favor.
If we study the singers who sound good and make those sounds easily, we’ll find they all have at least 1-3 things in common. The first is how they hold back their breath over phrases, the second is that they never sing loud AND breathy at the same time, and the third is that they don’t harden and push out their chin while singing.All singers, have at least one if not all three of the healthy habits happening or they are straining.  (if you tried the talent-vanishing-exercise above, you’ll see that singing is about what you move or hold in place)
So since you know that, you should be able to just start singing really well right away, right?
Yes and no.
That’s the subject of my next blog article, “How Muscle Memory is Different from Mental Memory” stay tuned!
Previous
Next